Wicked West Sussex Brighton fun, you’ll wizz round the track in our tough buggies with fully automatic transmission in a chassis with a full roll cage and all-round suspension. These purpose built off road mud buggies are very simple to drive – right foot down on the juice and go go go! And occasionally left foot to stop!

The races are run under Grand Prix rules. Four mud buggies race at a time, you’ll be lined up on the grid, have practice laps, then back up onto the grid, the flag drops and you’re off! Your own adrenalin filled roller coaster ride - but not on Brighton pier, in a field in a mud buggy!

Battling it out head to head round the purpose built circuit, hanging round the corners, over bumps and lumps, racing three of your mates until you see the chequered flag!

You each get four races, driving a different mud buggy each time and starting in a different grid position each time – so you get to start on the front row of the grid at least once!

The Grand Finale - the off road Rabid Relay!! We split you into two teams (i.e led by the Stag & Best Man, or Hen & Best Lady) according to how many points you’ve earned in your three races and then it’s muddy mayhem!

A driver from each team has to run to their mud buggy, leap in, get buckled up and then drive a flat-out lap head to head against the driver from the other team. Then they have to leap out, run to the next driver in their team, tag them and cheer them on as they in turn run to the buggy.

It's fun, fast and gets the adrenaline pumping all over again! 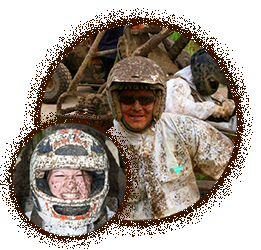 After the Relay we have the grand Podium Presentation, with the three top drivers being awarded their exclusive Mudmania winners medals, followed by a fizzy fight of Fosters all over each other!

There’s a spectators enclosure where your fellow competitors can take filthy photos, watch and shout encouragement or otherwise ;)